The Mississippi River and the 2016 Flood’s Impact on Dredging

By Sean Duffy, Executive Director of the Big River Coalition

The Mighty Mississippi River connects 31 states and 2 Canadian Provinces by a liquid superhighway that includes over 250 tributaries and features more miles of inland waterways than the rest of the world combined. As I contemplate my thoughts on the importance of this great river system, there is no doubt that muddy water also runs through my veins. Nevertheless, much of my advocacy involves explaining to others not so closely in tune with this economic superhighway as to just how important it truly is.

Follow the Money
The Mississippi River is our country’s river, a history our heritage and all of that embodies our prosperity. The American farmer remains competitive in world markets because of the cost savings offered by waterborne transportation that connects the over 350 million acres of farm land to world markets. This month, however, Reuters reported that not one, but two cargoes of Argentine wheat were scheduled to arrive at Wilmington, North Carolina, indicating a rare situation where U.S. buyers actually found it cheaper to purchase imported grain than abundant domestic supplies. Surely, some of that price advantage stems from cheaper grain from South America. No doubt, the challenged state of U.S. locks, waterways and channels (not dredged to their controlling depths) had something to do with it, as well.

Separately, dismal U.S. per capita investment in infrastructure ranks us globally at 143rd, or about $18 dollars per capita. Well before those numbers became public, however, I attempted to determine why navigation folks apparently did not like dredging contractors and ultimately, my conclusion was that it was all about funding. If the Corps of Engineers was properly funded and dredges were available then our channels would be maintained at fully authorized dimensions and in the end everyone would be happy with fluid commerce.

At the same time, I also came to understand that dredging contractors were businessman too and that investing in a new dredge large enough to work on the nation’s deep-draft channels meant investing between $125 to $175 million dollars in one piece of equipment. In order to make such a large investment, the business model must predict a sizeable return on investment. The first real agreement I reached with dredge contractors was that the Harbor Maintenance Tax and related Trust Fund had to be unlocked. The surplus of over $9 billion unaccounted for dollars generated by this ad valorem tax has to be allocated for what it was originally intended for.

Current Conditions
Today, and as the Mississippi River stage at the Carrollton Gauge (New Orleans) over the last few weeks crested at just over 17 feet, there is a real need for additional dredges to recover the channel. But, even the most passionate stakeholders often misunderstand the hydrology of this great river, For example, a common assumption is that there is more water at flood stage so there is no need to dredge. The one place I know that is not true is in Southwest Pass, the critical entrance to the country’s interior from the Gulf of Mexico. Typically, the Corps’ Mississippi Valley New Orleans group (MVN) needs to actively dredge in Southwest Pass when the Carrollton Gauge approaches 10 feet and rising. The Carrollton Gauge has been over 12 feet since December 15, 2015, with a crest of 17.06 feet reported in mid-January, with the stage manipulated by the operation of the Bonnet Carre’ Spillway. The Carrollton Gauge is predicted to remain over 14 feet until February 10, 2016.

Also in January, the Bar Pilots who are responsible for moving ships from the Gulf of Mexico to Pilottown were forced to implement a draft reduction of 4 feet to the new maximum draft of 43 feet from 47 feet. The scary part is that much more shoaling occurs when the stage level begins to recede, yet we lost 4 feet of draft before cresting. To make matters worse, the Corps only had one industry hopper dredge working on the channel, with another Government hopper dredge expected to arrive the following week. Nevertheless, recovering this channel after a flood event requires multiple dredges. A previous flood required up to eight hopper dredges to be used simultaneously to restore Southwest Pass.

Without a doubt, more shoaling is coming and without additional dredges to respond, more severe draft reductions are likely. Since Hurricane Sandy, however, there have been considerable efforts to recover multiple east coast channels and to rebuild coastal acreage by pumping sediment to synthetically create land. The impact now is that all most if not all available dredges large enough to work on the Mississippi are working on Sandy Restoration or channel deepening projects on the east coast. Together, the Corps of Engineers and their dredging contractors are trying to figure out how to get the job done, keeping Southwest Pass, the revolving door to international trade, open.

If you have never seen what 1.25 million cubic feet per second looks like you are really missing a spectacle. Locally, the reference is that this rate of flow would fill the Super Dome in one second.  There are areas of river that have currents of over 15 knots and although there are dozens of navigation restrictions in place, commerce continues to move – for now. Still, every foot of draft lost equates to $1 million in cargo left behind, so for each vessel that had to light load to 43 feet it left behind $4 million in cargo. Eventually, the cargo will get moved, but those higher costs are passed on to the consumer. Unless, of course, someone decides to import more wheat from South America.

Even at 1.25 million cubic feet per second, Southwest Pass remains in crisis. That’s because, as the water goes, the mud and dirt stays.

As the Corps of Engineers once again tries to solve the crisis, funding is no longer (at least for now) the problem. More equipment and dredges are needed. They will come, but only if stable and adequate funding is consistently available; year in and year out. This year’s USACE budget is a start.

(As published in the February 2016 edition of Marine News - http://magazines.marinelink.com/Magazines/MaritimeNews) 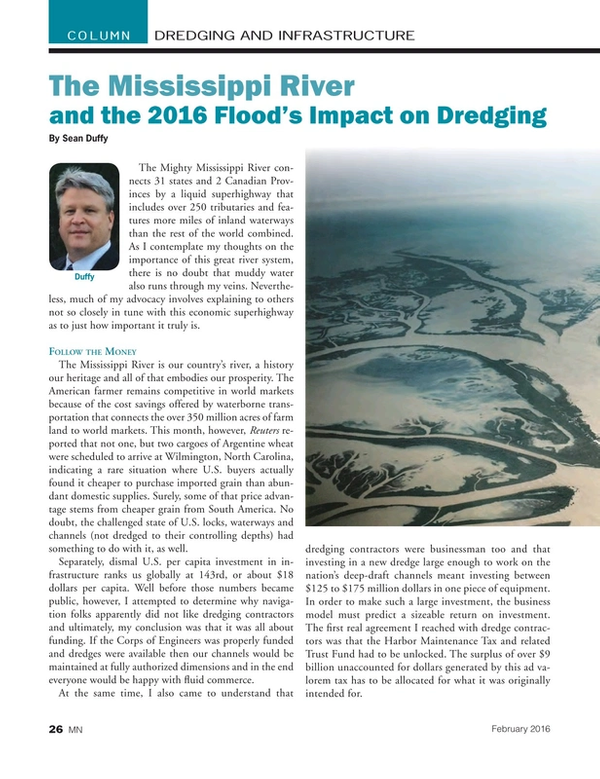 Read The Mississippi River and the 2016 Flood’s Impact on Dredging in Pdf, Flash or Html5 edition of February 2016 Marine News