The Quest to Fund Inland Waterways

By James A. Kearns

Infrastructure Projects: Perhaps Not So Quixotic After All?

Over the course of 2014, significant steps forward were taken in the quest to find additional sources of funding for inland waterways infrastructure projects.
First came the long awaited and much-celebrated Water Resources, Reform and Development Act of 2014 (WRRDA) in June, which included several provisions to address the funding needs of the ever-worsening condition of the inland waterways infrastructure. WRRDA eased the burden of the Olmsted Locks and Dam on the Inland Waterways Trust Fund (IWTF) by reducing the IWTF’s share of the costs for Olmsted from 50% to 15%. WRRDA also expedited the process by which the U.S. Army Corps of Engineers is to study and carry out new construction and rehabilitation projects for the inland waterways infrastructure.

WRRDA and more
WRRDA laid the groundwork for additional sources of funding in two other respects. First, Section 2004 of WRRDA, captioned “Inland Waterways Revenue Studies,” requires the Secretary of the Army to conduct two studies. One study is to examine the “potential benefits and implications of authorizing the issuance of federally tax-exempt bonds secured against the available proceeds, including projected annual receipts, in the Inland Waterways Trust Fund.” A separate study is to explore the “potential revenue sources from which funds could be collected to generate additional revenues for the Inland Waterways Trust Fund.”
A second provision, Section 5014, is captioned “Water Infrastructure Public-Private Partnership Pilot Program,” and requires that the Secretary establish a “pilot program to evaluate the cost effectiveness and project delivery efficiency of allowing non-Federal pilot applicants to carry out authorized water resources development projects for coastal harbor improvement, channel improvement, inland navigation, flood damage reduction, aquatic ecosystem restoration, and hurricane and storm damage reduction.” More on this provision later.
A final development in increasing the funding for inland waterways infrastructure projects came at the very end of the year:  the inclusion in the so-called “tax extenders” legislation of an increase in the tax assessed on diesel fuel used on the inland waterways from 20 cents per gallon to 29 cents per gallon, which takes effect on April 1, 2015. These fuel taxes go into the IWTF, and some industry sources have estimated that the fuel tax increase will generate approximately $40 million in additional revenues for the IWTF every year. If these additional revenues are applied directly to construction and rehabilitation projects, they will bring substantial benefits to the inland waterways infrastructure. Even further, such additional revenues could be leveraged through, say, bond financing to achieve even more dramatic results. A study prepared for the United Soybean Board by the Center for Ports and Waterways of the Texas Transportation Institute, titled “New Approaches for U.S. Lock and Dam Maintenance and Funding,” published in January 2013, explains and illustrates how this could be done. The study can be found at www.soytransportation.org.

Stakeholder Buy-In
This eleventh-hour increase in the fuel tax was almost as surprising as it was welcome. For the past several years, the inland waterways industry has been recommending this increase. This recommendation was included in the Capital Projects Business Model prepared by the Inland Marine Transportation System Capital Investment Strategy Team, which was unanimously approved and adopted by the Inland Waterways Users Board in 2010. In 2013, the Waterways Council and a coalition of nearly 40 stakeholders expressed their support for increasing the fuel tax to at least 26 cents per gallon in a letter to the House Ways and Means Committee.
Early in 2014, Congressman Dave Camp (R MI), chairman of the House Ways and Means Committee, included an increase of six cents in this tax in his draft of the Tax Reform Act of 2014, but his proposal to overhaul the tax code made little headway in the House of Representatives. Despite this discouraging track record in attempting to obtain the fuel tax increase over the past several years, the industry succeeded in getting the increase of nine cents included in the tax extender legislation, which arrived—even without help from FedEx or UPS—just in time for the holidays.
Toward the end of the year an initiative at the state level got under way as well. This is an effort to take advantage of public-private partnership provisions of WRRDA to preserve the authorization of the Navigation and Ecosystem Sustainability Program (NESP). NESP is a long-term program authorized by Congress in the 2007 Water Resources Development Act for navigation improvements and ecological restoration for the Upper Mississippi River System and the Illinois Waterway navigation system, following years of study by the U.S. Army Corps of Engineers, going back to 1989, and collaboration among Illinois and the other states in the Upper Mississippi River System. The primary goal of NESP is to implement an integrated, dual-purpose plan to ensure the economic and environmental sustainability of the Upper Mississippi River System and the Illinois Waterway navigation system by reducing commercial traffic delays while restoring, protecting, and enhancing the environment.  Congress last appropriated funding for NESP in 2011. Under current law, NESP could be de-authorized if it does not receive funding in 2016, undoing years of study and multi-state collaboration.
Specifically identified as included within NESP are several locks and dams on the Illinois River, since this waterway connects the Great Lakes with the Upper Mississippi River and commodities shipped on the Illinois River can be transshipped via the St. Lawrence Seaway to Canada and Europe, or via the Mississippi to the Upper Midwest or to the Gulf of Mexico and beyond. Although the full scope of NESP encompasses all of the states within the Upper Mississippi River System, an appropriation by Congress of funds by 2016 for a construction project for one or more of the locks and dams on the Illinois River that are specifically identified in NESP would avoid the de-authorization of NESP for lack of funding.

Public-Private Initiatives
Enter WRRDA Section 5014 and the Water Infrastructure Public-Private Partnership Pilot Program.  Section 5014 allows for the transfer of federally authorized projects to a non-federal sponsor for design, financing, construction, operations and maintenance. The State of Illinois, through its legislature and its Department of Natural Resources, which has responsibility for waterways within the State of Illinois, is evaluating whether to serve as the sponsor for a new public-private regional authority that would become the non-federal sponsor for this program under WRRDA Section 5014.
Then-Governor Pat Quinn of Illinois notified the U.S. Army Corps of Engineers in a letter that Illinois would begin to address the need for an innovative delivery model to upgrade the locks and dams on the Illinois River through the use of a public-private partnership as authorized in WRRDA.
Those working on this initiative have designated it as the “Illinois and Middle Mississippi River Public-Private Partnership Pilot Program,” or IMMR P5. The initial focus will be on the locks and dams within the State of Illinois as the first phase of the program, in order to save the time that would otherwise be required to establish interstate agreements with Iowa and Missouri for the locks and dams on the Mississippi River between Illinois and each of those other two states. If the first phase is successful, then the program would be expanded to a tri-state organization among Illinois, Iowa and Missouri as additional segments of the Upper Mississippi River System are added to the program.
The first practical step would be the formation of an Inland Rivers and Waterways Working Group, under the auspices of the Illinois Department of Natural Resources, with the expectation that it would transition into an Inland Rivers and Waterways Authority that would serve as the non-federal and local sponsor of the program under WRRDA Section 5014.

Failure is Not an Option
Legislative support for this initiative is being led by both Illinois State Senator David Koehler, Chair of the Agriculture Conservation Committee of the Illinois State Senate, and Illinois State Senator Martin Sandoval, Chair of the Transportation Committee of the Illinois State Senate. On December 2, 2014, a subject matter hearing was held before the combined committees on the issues currently needing to be addressed for the locks and dams on the Illinois River and on the feasibility of the IMMR P5 approach. Representatives of the Illinois Department of Natural Resources, of the U.S. Army Corps of Engineers, of the Illinois Soybean Association, of the environmental and engineering consulting firm CH2M Hill, of the Nature Conservancy, and of several environmental advocacy organizations presented testimony. Senator Koehler chaired the hearing.
In his opening remarks, Senator Koehler summarized the importance of the inland waterways to the economic health of Illinois and the nation, and the need to address the continuing deterioration of the inland waterways infrastructure. Following the testimony of certain environmental advocacy organizations who expressed opposition to facilitating commercial navigate on the inland waterways, Senator Koehler asked, “Is anyone here suggesting that we do nothing?” When no one responded in the affirmative, he said, “Good – because that is not one of the options.”

(As published in the February 2015 edition of Marine News - http://magazines.marinelink.com/Magazines/MaritimeNews) 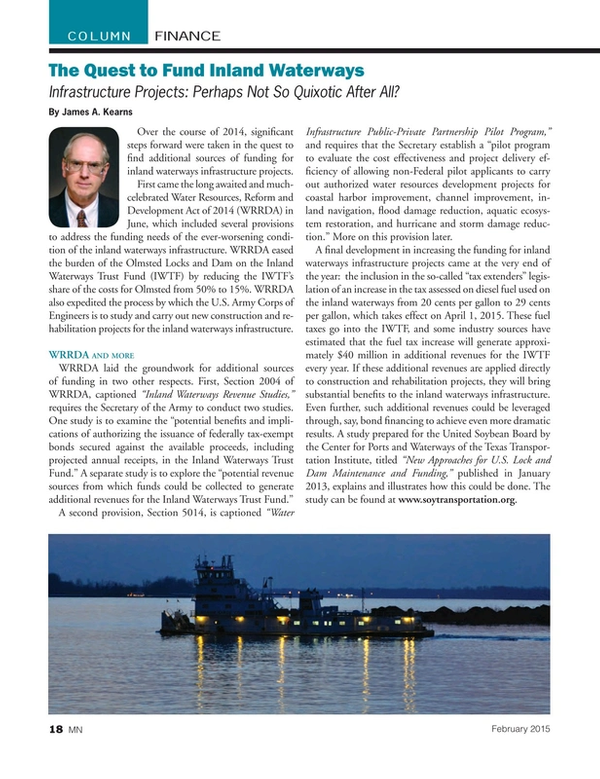