Engineering Efficiency on the Paraná

The Paraná River flows some 3,000 miles through Brazil, Paraguay and Argentina, meeting the Paraguay River and then farther downstream the Uruguay River before eventually emptying into the Atlantic Ocean at Buenos Aires. Second only to the Amazon for longest river in South America, the Paraná provides a vital means for South American transporters to carry bulk petroleum, agricultural and manufactured goods. The river’s geographic properties pose a number of challenges for operators that have not been addressed by naval architects — until recently.
A major problem on the Paraná is that most pushboats currently navigating the waterway – some upwards of 40 years old – are inefficient and were mostly purchased secondhand from North American operators. Above all, none were designed specifically to meet the demands of the Paraná. But as efforts to ramp up production and efficiencies escalate in South America, a new generation of vessels will enter operation.

RApide 4500 to the Rescue
Enter Robert Allan’s new custom-designed push boats, RApide 4500, which according to the designer, are the first engineered for the Paraná River, present a number of unique elements to improve operational capabilities and overall efficiency. The newbuild fleet will enter long-term barge transportation contracts to move iron ore some 2,500 kilometers from Vale S.A.’s Corumba mine in southwest Brazil to tidewater near Buenos Aires. Vale intends to move roughly 10 million tons of iron ore per year from Corumba via the Paraná by awarding three contracts to push boat operators for 3.3 million tons each, the first of which was won by Robert Allan’s client Hidrovias do Brazil.
The Hidrovias do Brazil contract calls for the construction and operation of eight RApide 4500 shallow-draft river push boats (46.5 x 16.5 x 4 meters) and 144 Mississippi-style hopper barges (61 x 15 x 4.27 meters) configured especially for the project to operate 24 hours a day, 11 months of the year.
“These boats are among the first to be specifically designed for the challenges of this particular river system,” said Mike Fitzpatrick, vice president at Robert Allan. “There are 40 or so push boats [currently] operating on the Paraguay Paraná, and up until last year, they were all pretty much hand-me-downs from the Mississippi River. They’re 30 or 40-year-old push boats purchased in the States and transported down to the river, typically too deep for the Paraguay Paraná. They work, but only during certain portions of the year and in certain portions of the river. A Mississippi boat is too deep; it doesn’t have enough fuel capacity, and generally doesn’t have enough crew accommodation. They’re not ideal for the river system.”
Looking to forgo the limitations of existing Paraná fleet, RA generated a design geared for the river on which they’d operate. “The goal was to design vessels that were optimized for the required service on the Paraguay Paraná,” Fitzpatrick said, “which means fuel capacity for a range of 5,000 kilometers, accommodation for upwards of 16 people, and relatively shallow draft.”
Fitzpatrick said the concept for the vessels was in the works as far back as 2005 when the Corumba mine was owned by the U.K.-headquartered mining company Rio Tinto, who would own and operate the vessels themselves. Contracts were in place to build the push boats at shipyards in Brazil, Chile and China, with barge construction contracts in Paraguay, Argentina and China, when the financial crisis of 2008 caused the project to be scrapped, and the mine was then sold to Brazilian mining corporation Vale. Vale sat on the project for a few years until it eventually decided the time was right to award operational contracts. That’s when Hidrovias do Brasil entered the picture, working with RA to present a design for Vale.
The highly specialized fleet is to be built entirely in Turkey’s Uzmar Shipyard, known as the “workboat and tug factory.” The first two vessels for Hidrovias do Brasil were transported from Turkey to Uraguay via semi-submergible heavylift vessels were delivered in early March 2014 and are currently undergoing owner acceptance trials, with the remaining six vessels expected for delivery by the third quarter of 2015.

Special Features
The vessels are propelled by a diesel-electric propulsion system, which is helpful to improving operational efficiency in a few important areas. An electric azimuth drive will provide a better option than a conventional six-shaft propeller boat in terms of maneuverability and speed and also allows for a shallower draft (2.1 meters). But according to Fitzpatrick, “The primary technical, operational reason for going diesel-electric was to ensure a safe crash stop.”
“The biggest reason for azimuthing drives,” Fitzpatrick explained, “is the requirement on the river that the vessel be able to stop in 2.5 convoy lengths, which is about 700 meters. Up until some point probably about two years ago, that regulation was somewhat loosely defined as just being able to stop in 2.5 convoy lengths, but it didn’t stipulate under what conditions, so people were doing that slightly loaded, flat water, going up river. About two years ago, the Brazilian authorities clarified the requirement to say that the crash stop has to happen from a fully loaded condition going down river at full speed, and they have to be able to stop not just relative to the water, but over ground.”
Fitzpatrick continued, “This is a very challenging requirement, and ultimately it has driven the installed power and the propulsion equipment. With azimithic drives, 100 percent of our ahead thrust we can also get astern, where with conventional propellers you’re only going to get 50 percent astern thrust.”
Fitzpatrick admits that diesel-electric drives are significantly more expensive than conventional propulsion systems and create a more complex vessel which requires maintenance from a higher level or personnel, but he said they nonetheless provide the best technical option, especially when considering in the river’s geography and operational requirements. “With a conventional propeller boat, especially running on heavy fuel, going full ahead to full astern, there’s a very high chance, with the propellers being reversible, of overloading the engines and stalling the ship, which would be an absolute disaster if they tried to do a crash stop.”
Another challenge presented by the river system is its enormous amount of debris, especially when running azimuth drives, which Fitzpatrick said has led to the installation of propellers, nozzles and gear boxes in the drive that are “essentially ice-class.” The electric propulsion system would then offer another benefit as an overload would be passed to the main generator.
Three main diesel generators sets provide 3 x 1,710 ekW of power to 3 x 1,600 kW motors, each driving a Schottel SRP 1215 Z-drive with nozzle custom-modified for shallow draft hull form. The nozzle is flattened on the bottom to reduce draft and suction, while the upper part of the nozzle is designed to match the shape of the tunnel for better embedment into the hull, which reduces draft by another foot. The major electric components, such as AFE drives, propulsion motors, generators, etc., are of ABB design and supplied by Elkon, while the generator engines are three Wärtsilä 9L20, medium speed engines, each producing 1,800 bkW at 1,000 rpm.
Schottel, ABB/Elkon and Wärtsilä were chosen not only for the equipment capabilities and suitability to the project, but also for the in-service support they will provide. Due to the vessel’s complexities, a high degree of technical maintenance is required, leading the companies to establish project-specific service stations to assist Hidrovias do Brasil in the remote area of Paraguay.

Economy and the Environment
Notably, the push boats will run on heavy fuel oil (HFO), saving thousands in fuel costs, though the ability to operate on marine diesel oil (MDO) is available if needed. According to Fitzpatrick, no other river boats in the world run on HFO, but “because of the length of the journey and constant load on the vessel, we’re able to figure these vessels to run on heavy fuel, which represents a 40 percent reduction right off the bat in fuel costs. That’s a huge factor.”
Because the boats are carrying heavy fuel, Robert Allan wanted to make the vessels double hull. Fitzpatrick explained, “Even though it’s not required by regulation, that was one of our stipulations that if we’re going to do this we want all the fuel off the shell, and the owner agreed quite readily to that.”
Each push boat has a total fuel capacity of 500 meters³ of HFO and 30 meters³ of MDO, with ballast capacity of 400 meters³. The potable water capacity of 34 meters³ is supplemented by two onboard flash evaporator units.

Rugged Barges for Demanding Conditions
The barges, though of conventional hopper Mississippi style, are also tailored for the Paraná. The barges, which include a combination of box-shaped barges for mid-convoy and rake-ended barges for the ends, are designed to maximum allowable convoy dimensions, and must carry the required 2,500t deadweight with limited draft due to restricted under keel clearance. The barges will operate in 4x4 convoys of 16 to transport lots of approximately 40,000 metric tons per shipment. According to RA, a rigorous design exercise was required to minimize the steel weight in the barge structure without sacrificing the strength needed for the demanding service.
RA said finding a shipyard with the capacity to build and deliver 128 barges in the required time frame was also a challenge, but investigations soon led to ZPMC in China, a facility largely noted for its extensive production of large container cranes. One of the major attractions of this facility, RA said, was the availability of the facility’s semi-submersible ocean transporter fleet for delivering the barges. Thirty-two barges have already arrived in Buenos Aires as art of the first shipment from China, while an additional 16 barges are presently under construction at CIE S.A. in Asuncion, Paraguay. RA provided construction overseeing services for the barge fleet on behalf of the owners. The last batch of barges will also see a 54 x 25.2 meter 1,600 metric ton floating drydock, also built at ZPMC and designed by RA, for Hidrovias do Brasil to service its new fleet of push boats and barges.
The entire project is noteworthy in that these built-for-purpose vessels are part of a larger effort to increase efficiencies on this South American waterway, where very soon, local grain producers hope to compete with American suppliers and move increasingly larger volumes to global markets in a post-Panamax world. The race is on and the new push boats and barges are expected to commence ore movements in October 2014.

(As published in the April 2014 edition of Marine News -  www.marinelink.com) 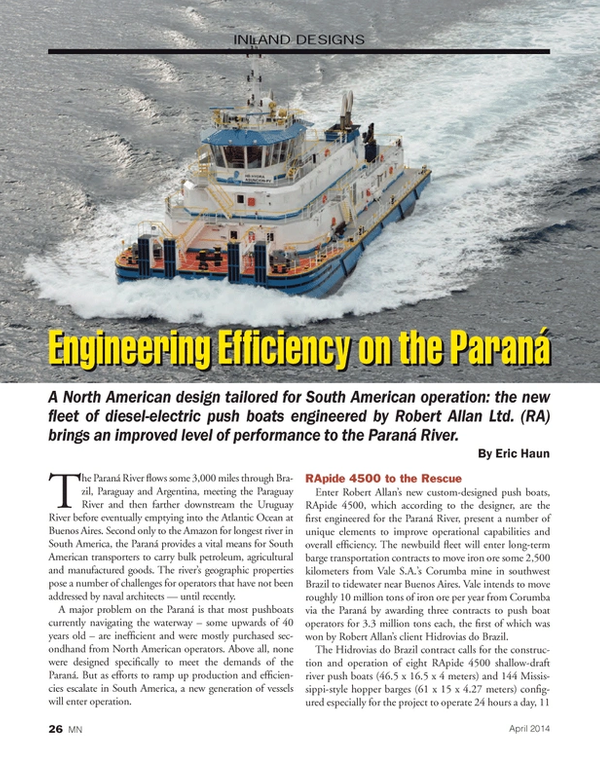 Read Engineering Efficiency on the Paraná in Pdf, Flash or Html5 edition of April 2014 Marine News

Other stories from April 2014 issue