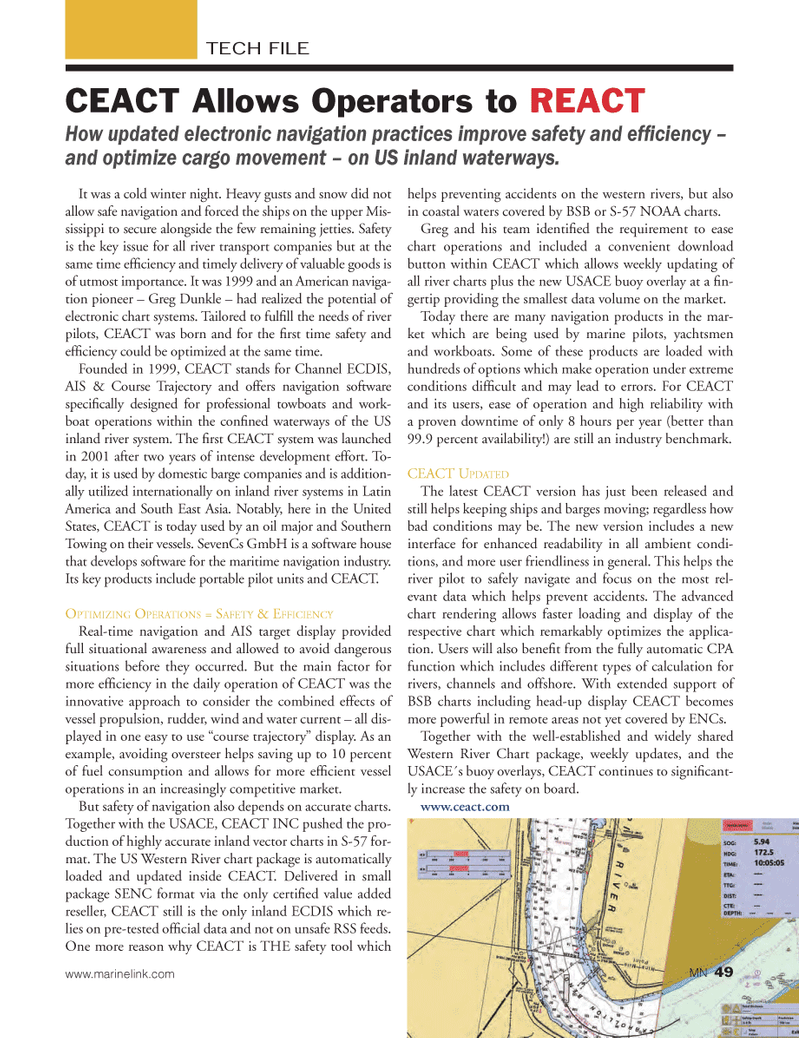 It was a cold winter night. Heavy gusts and snow did not allow safe navigation and forced the ships on the upper Mis- sissippi to secure alongside the few remaining jetties. Safety is the key issue for all river transport companies but at the same time effi ciency and timely delivery of valuable goods is of utmost importance. It was 1999 and an American naviga- tion pioneer – Greg Dunkle – had realized the potential of electronic chart systems. Tailored to fulfi ll the needs of river pilots, CEACT was born and for the fi rst time safety and effi ciency could be optimized at the same time.

AIS & Course Trajectory and offers navigation software specifi cally designed for professional towboats and work- boat operations within the confi ned waterways of the US inland river system. The fi rst CEACT system was launched in 2001 after two years of intense development effort. To- day, it is used by domestic barge companies and is addition- ally utilized internationally on inland river systems in Latin

America and South East Asia. Notably, here in the United

States, CEACT is today used by an oil major and Southern

Towing on their vessels. SevenCs GmbH is a software house that develops software for the maritime navigation industry.

Its key products include portable pilot units and CEACT.

Real-time navigation and AIS target display provided full situational awareness and allowed to avoid dangerous situations before they occurred. But the main factor for more effi ciency in the daily operation of CEACT was the innovative approach to consider the combined effects of vessel propulsion, rudder, wind and water current – all dis- played in one easy to use “course trajectory” display. As an example, avoiding oversteer helps saving up to 10 percent of fuel consumption and allows for more effi cient vessel operations in an increasingly competitive market.

But safety of navigation also depends on accurate charts.

Together with the USACE, CEACT INC pushed the pro- duction of highly accurate inland vector charts in S-57 for- mat. The US Western River chart package is automatically loaded and updated inside CEACT. Delivered in small package SENC format via the only certifi ed value added reseller, CEACT still is the only inland ECDIS which re- lies on pre-tested offi cial data and not on unsafe RSS feeds.

One more reason why CEACT is THE safety tool which helps preventing accidents on the western rivers, but also in coastal waters covered by BSB or S-57 NOAA charts.

Greg and his team identifi ed the requirement to ease chart operations and included a convenient download button within CEACT which allows weekly updating of all river charts plus the new USACE buoy overlay at a fi n- gertip providing the smallest data volume on the market.

Today there are many navigation products in the mar- ket which are being used by marine pilots, yachtsmen and workboats. Some of these products are loaded with hundreds of options which make operation under extreme conditions diffi cult and may lead to errors. For CEACT and its users, ease of operation and high reliability with a proven downtime of only 8 hours per year (better than 99.9 percent availability!) are still an industry benchmark.

The latest CEACT version has just been released and still helps keeping ships and barges moving; regardless how bad conditions may be. The new version includes a new interface for enhanced readability in all ambient condi- tions, and more user friendliness in general. This helps the river pilot to safely navigate and focus on the most rel- evant data which helps prevent accidents. The advanced chart rendering allows faster loading and display of the respective chart which remarkably optimizes the applica- tion. Users will also benefi t from the fully automatic CPA function which includes different types of calculation for rivers, channels and offshore. With extended support of

Together with the well-established and widely shared