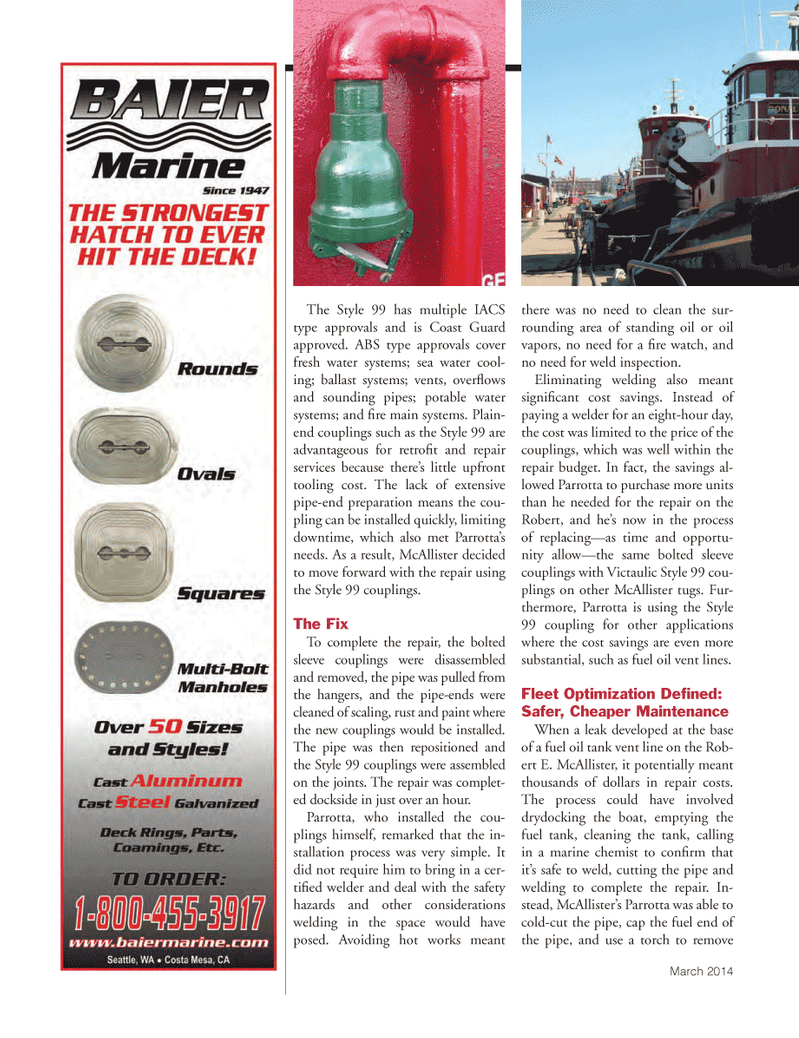 To complete the repair, the bolted sleeve couplings were disassembled and removed, the pipe was pulled from the hangers, and the pipe-ends were cleaned of scaling, rust and paint where the new couplings would be installed.

The pipe was then repositioned and the Style 99 couplings were assembled on the joints. The repair was complet- ed dockside in just over an hour.

Parrotta, who installed the cou- plings himself, remarked that the in- stallation process was very simple. It did not require him to bring in a cer- tifi ed welder and deal with the safety hazards and other considerations welding in the space would have posed. Avoiding hot works meant there was no need to clean the sur- rounding area of standing oil or oil vapors, no need for a fi re watch, and no need for weld inspection.

Eliminating welding also meant signifi cant cost savings. Instead of paying a welder for an eight-hour day, the cost was limited to the price of the couplings, which was well within the repair budget. In fact, the savings al- lowed Parrotta to purchase more units than he needed for the repair on the

Robert, and he’s now in the process of replacing—as time and opportu- nity allow—the same bolted sleeve couplings with Victaulic Style 99 cou- plings on other McAllister tugs. Fur- thermore, Parrotta is using the Style 99 coupling for other applications where the cost savings are even more substantial, such as fuel oil vent lines.

When a leak developed at the base of a fuel oil tank vent line on the Rob- ert E. McAllister, it potentially meant thousands of dollars in repair costs.

The process could have involved drydocking the boat, emptying the fuel tank, cleaning the tank, calling in a marine chemist to confi rm that it’s safe to weld, cutting the pipe and welding to complete the repair. In- stead, McAllister’s Parrotta was able to cold-cut the pipe, cap the fuel end of the pipe, and use a torch to remove