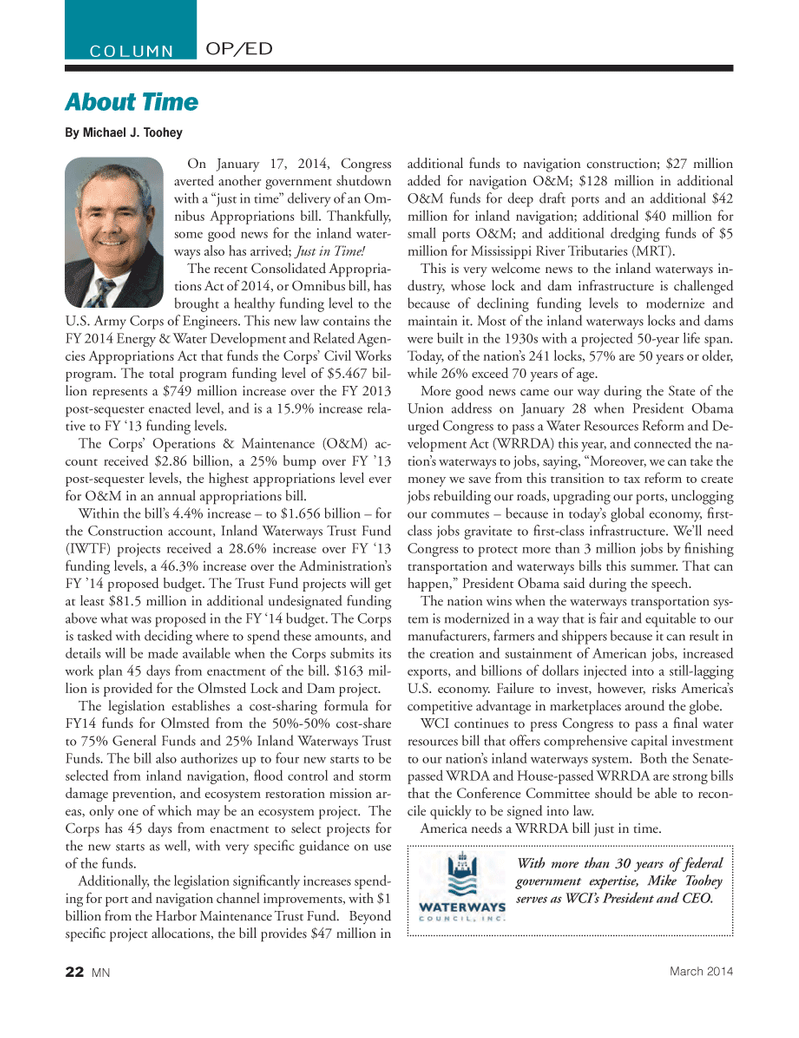 On January 17, 2014, Congress averted another government shutdown with a “just in time” delivery of an Om- nibus Appropriations bill. Thankfully, some good news for the inland water- ways also has arrived; Just in Time!

The recent Consolidated Appropria- tions Act of 2014, or Omnibus bill, has brought a healthy funding level to the

U.S. Army Corps of Engineers. This new law contains the

Within the bill’s 4.4% increase – to $1.656 billion – for the Construction account, Inland Waterways Trust Fund (IWTF) projects received a 28.6% increase over FY ‘13 funding levels, a 46.3% increase over the Administration’s

FY ’14 proposed budget. The Trust Fund projects will get at least $81.5 million in additional undesignated funding above what was proposed in the FY ‘14 budget. The Corps is tasked with deciding where to spend these amounts, and details will be made available when the Corps submits its work plan 45 days from enactment of the bill. $163 mil- lion is provided for the Olmsted Lock and Dam project.

The legislation establishes a cost-sharing formula for

Funds. The bill also authorizes up to four new starts to be selected from inland navigation, fl ood control and storm damage prevention, and ecosystem restoration mission ar- eas, only one of which may be an ecosystem project. The

Corps has 45 days from enactment to select projects for the new starts as well, with very specifi c guidance on use of the funds.

This is very welcome news to the inland waterways in- dustry, whose lock and dam infrastructure is challenged because of declining funding levels to modernize and maintain it. Most of the inland waterways locks and dams were built in the 1930s with a projected 50-year life span.

More good news came our way during the State of the

Union address on January 28 when President Obama urged Congress to pass a Water Resources Reform and De- velopment Act (WRRDA) this year, and connected the na- tion’s waterways to jobs, saying, “Moreover, we can take the money we save from this transition to tax reform to create jobs rebuilding our roads, upgrading our ports, unclogging our commutes – because in today’s global economy, fi rst- class jobs gravitate to fi rst-class infrastructure. We’ll need

Congress to protect more than 3 million jobs by fi nishing transportation and waterways bills this summer. That can happen,” President Obama said during the speech.

The nation wins when the waterways transportation sys- tem is modernized in a way that is fair and equitable to our manufacturers, farmers and shippers because it can result in the creation and sustainment of American jobs, increased exports, and billions of dollars injected into a still-lagging

U.S. economy. Failure to invest, however, risks America’s competitive advantage in marketplaces around the globe.

WCI continues to press Congress to pass a fi nal water resources bill that offers comprehensive capital investment to our nation’s inland waterways system. Both the Senate- passed WRDA and House-passed WRRDA are strong bills that the Conference Committee should be able to recon- cile quickly to be signed into law.