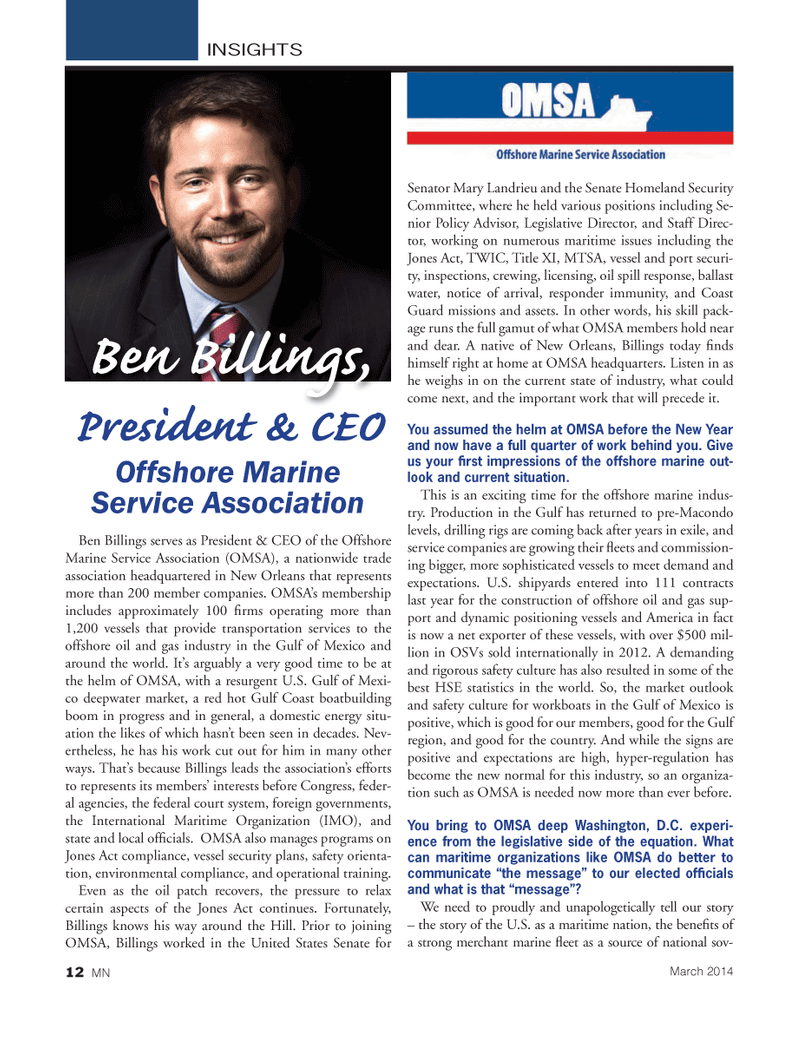 Ben Billings serves as President & CEO of the Offshore

Marine Service Association (OMSA), a nationwide trade association headquartered in New Orleans that represents more than 200 member companies. OMSA’s membership includes approximately 100 fi rms operating more than 1,200 vessels that provide transportation services to the offshore oil and gas industry in the Gulf of Mexico and around the world. It’s arguably a very good time to be at the helm of OMSA, with a resurgent U.S. Gulf of Mexi- co deepwater market, a red hot Gulf Coast boatbuilding boom in progress and in general, a domestic energy situ- ation the likes of which hasn’t been seen in decades. Nev- ertheless, he has his work cut out for him in many other ways. That’s because Billings leads the association’s efforts to represents its members’ interests before Congress, feder- al agencies, the federal court system, foreign governments, the International Maritime Organization (IMO), and state and local offi cials. OMSA also manages programs on

Even as the oil patch recovers, the pressure to relax certain aspects of the Jones Act continues. Fortunately,

Billings knows his way around the Hill. Prior to joining

OMSA, Billings worked in the United States Senate for

Guard missions and assets. In other words, his skill pack- age runs the full gamut of what OMSA members hold near and dear. A native of New Orleans, Billings today fi nds himself right at home at OMSA headquarters. Listen in as he weighs in on the current state of industry, what could come next, and the important work that will precede it.

You assumed the helm at OMSA before the New Year and now have a full quarter of work behind you. Give us your fi rst impressions of the offshore marine out- look and current situation.

This is an exciting time for the offshore marine indus- try. Production in the Gulf has returned to pre-Macondo levels, drilling rigs are coming back after years in exile, and service companies are growing their fl eets and commission- ing bigger, more sophisticated vessels to meet demand and expectations. U.S. shipyards entered into 111 contracts last year for the construction of offshore oil and gas sup- port and dynamic positioning vessels and America in fact is now a net exporter of these vessels, with over $500 mil- lion in OSVs sold internationally in 2012. A demanding and rigorous safety culture has also resulted in some of the best HSE statistics in the world. So, the market outlook and safety culture for workboats in the Gulf of Mexico is positive, which is good for our members, good for the Gulf region, and good for the country. And while the signs are positive and expectations are high, hyper-regulation has become the new normal for this industry, so an organiza- tion such as OMSA is needed now more than ever before.

You bring to OMSA deep Washington, D.C. experi- ence from the legislative side of the equation. What can maritime organizations like OMSA do better to communicate “the message” to our elected offi cials and what is that “message”?

We need to proudly and unapologetically tell our story – the story of the U.S. as a maritime nation, the benefi ts of a strong merchant marine fl eet as a source of national sov-