The Maritime Labor Convention of 2006 became effective on 20 August 2013: Are the authorities ready?

Consider that MLC 2006 Regulation 1.2-Medical certificate. Standard A1.2 states that “a competent authority shall require prior to beginning work on a ship, seafarer’s hold a valid medical certificate.”  Under paragraph 7a of that same regulation it further states that “a medical certificate shall be valid for a maximum period of TWO YEARS.” That requirement also became official for U.S. mariners as per “78 Federal Register 77795,” released on 24 December 2013 and with an effective date of 24 March 2014.
Over the past 35 years of my maritime career, I have renewed and upgraded mariner licenses or Merchant Mariner Credentials (MMC now) at least seven times at regular five-year intervals. And yet, the new requirement of medical certification every two years is intriguing. “Vessel owners/operators should ensure that all U.S. seafarers to which STCW applies hold a valid Merchant Mariner Credential (MMC),” states U.S. Coast Guard NVIC 02-13 issued July 30, 2013 in an attempt to explain compliance with the MLC. “A valid MMC constitutes the proof of a valid medical certificate.” This statement creates a quandary: The MMC is issued at five year intervals. Arguably, the (new) lack of synchronicity may create, at the very least, enforcement and compliance complications.

Navigating the New Normal
A two-year medical recertification process introduces more than one variable to the already complicated process of maintaining a valid marine license. While checking the status of my own renewal application, I noted that I have a “Medical Credential approved to print” message from the USCG which allowed access two weeks prior to official USCG announcement for rule making.
Under the old regime (before the centralized certification facility known as the National Maritime Center in Martinsburg, West VA came about) a seafarer would see a medical doctor, who was usually his or her family physician, every five years to go over a four page medical evaluation. At the conclusion of the visit, the attending physician signed the form listing his or her medical license number while attesting to the seafarer’s fitness or unfitness for sea duty.
Under MLC paragraph 4 of Standard A1.2, “Medical certificates shall be issued by a duly qualified medical practitioner…” The regulation further states that “Practitioners must enjoy full professional independence in exercising their medical judgment in undertaking examination procedures.” However, under the present system, applications are reviewed in Martinsburg under the supervision of the US Coast Guard. The physician’s assistant (PA) who reviewed my medical file works within the confines of the USCG facility located in Martinsburg. One has to ask whether a PA able to enjoy independence in exercising his or her medical judgment while not seeing me personally.
In addition, I found it interesting that while speaking with Coast Guard physician’s assistant on my most recent renewal, the PA stated, he “accepted the evaluation from my cardiologist.” Upon relating this acceptance to my cardiologist’s office, he uttered a one-word response: “hubris.”  During this mariner’s previous renewal, it took four months without any medical issues. This time around, it has taken seven months with the convenience of being shoreside and ability to address the various issues during that entire time. Not every working mariner has that luxury. Consider a mariner with a standard rotation of two months on and two months off, or a six month tour, trying to address medical issues in the two-year medical cycle. In a situation where there are no medical issues, this may be feasible. However, how many of us have experienced the delays and time lags in the physicians’ referral process, trying to see a specialist. In the new two-year cycle, how many mariners’ livelihoods will be casualties of the delays in trying to secure the medical certificate? It would seem prudent for a mariner to start the physical renewal process at least a year before the expiration of the current certificate. Ship’s Masters already have a difficult enough time signing crew with all of the proper certifications, and the new medical certification process has made it tougher. How do ship Masters/ship operators find 20 years of experience in 20-year-old bodies?

More Unanswered Questions
The medical certification process has the additional burden of all approvals being made by a physician’s assistant at the USCG facility in West VA. Sight unseen, a PA will review the records of a patient and determine fitness for duty. In the past, this had been the responsibility of the mariner’s attending physician. Beyond this, aviation and trucking fall under the Department of Transportation (DOT) while the transportation of goods, services and people over water falls under the Department of Homeland Security. This begs another question: if transport over the water is a security issue, why are internationally bound airline pilots not regulated the same way?

Planes, Trains and Boats, too
Under DOT, the trucking industry members submit to a physical examination by a licensed “medical examiner.” The term includes, but is not limited to, doctors of medicine (MD), doctors of osteopathy (DO), physician assistant (PA), advanced practice nurses (APN), and doctors of chiropractic (DC) every two years.
So a trucker, every two years, may use a primary care provider, if that provider wants to conduct a “DOT physical exam.” They may also find a medical examiner in the yellow pages of a telephone book, or on the Internet by using an Internet directory or search engine by looking under “Occupational Health.” The end result is a physician who actually looks at a trucker, talks to the trucker, and personally engages with the trucker, and is trusted to make an evaluation regarding the trucker’s ability to drive.
For the aviation industry, under the auspicious of the Federal Aviation Authority (FAA), there are over one thousand (1,000) Aviation Medical Examiners (AME’s) spread within the United States and some foreign countries.
Applicants for the AME certification must hold a current valid medical license as an MD or DO (with no restrictions or limitations) issued by the state licensing authority in the location where they intend to perform medical examinations for the FAA. The regulations are a bit stricter here: aviators who transport people and cargo commercially must hold a Class I Pilot license and get medically certified if under 40 years of age every 12 months. Then if a Class I Pilot is over the age of 40, he or she must get medically certified every 6 months, but the certification is still by an attending physician.
Upon speaking with a Federal official who has knowledge of the medical certification process now used by USCG, that official stated it was not in the regulations to assume the FAA model. In addition, the official stated that it was “cheaper” to have the centralized location versus using the FAA model of AME’s located throughout the country. In other words, saving a few USCG dollars is more important than protecting the jobs of American seaman. Without the timely issuance of the medical certificate, our American seaman cannot work and our Maritime Security Program (MSP) along with Jones Act (American) ships cannot sail.
According to the latest Federal Register 78 issued on 24 December 2013, the USCG is looking into using Designated Medical Examiners (DME), but final implementation is a long way off.

Additional Challenges
The two year certification may present some additional challenges for transoceanic mariners. Specifically, the MLC Standard A1.2 paragraph 8 also states that “In urgent cases, the competent authority may permit a seafarer to work without a valid medical certificate until the next port of call where the seafarer can obtain a medical certificate from a qualified medical practitioner, provided that:

Meanwhile, Section 9 states, “If the period of validity of a certificate expires in the course of a voyage, the certificate shall continue in force until the next port of call where the seafarer can obtain a medical certificate from a qualified medical practitioner, provided that the period shall not exceed three months.”
So what happens to the American mariner when a medical certificate expires in the course of a foreign voyage aboard an American ship? According to sources, the seaman will not be signed on the ship/boat until he/she possesses the certificate issued from Martinsburg, WVA. An internationally accepted affidavit from an attending physician will not serve as temporary documentation until the WVA facility issues the certificate. Nowadays, that mariner who wants to feed a family has found that it has just gotten just a little bit harder.
The ILO FAQ on the MLC 2006 provides an explanation of Article V, paragraph 7 of the MLC, 2006 noting that it contains what is called the ”no more favorable treatment clause.” This clause will ensure a level playing field under which the ships of countries that have ratified the Convention will not be placed at a competitive disadvantage as compared with ships flying the flag of countries that have not ratified the MLC, 2006. In other words until the US Senate ratifies the MLC 2006 – and it does not look like they ever will – American ships and seamen engaged upon international voyages will be subject to increased scrutiny from Port State Control. Ultimately, this impacts shipping companies who are already experiencing tight bottom lines.
There are many facets of the MLC 2006 and the medical certificate is one small part. Until the American Port State authority simplifies medical certification by allowing a medical practitioner to personally certify a seaman every two years, using the international or DOT model of either the aviation or trucking industry for certification, the American seamen and ships are at another competitive disadvantage.
Closer to home, the vast majority of the 200,000 U.S. certificated mariners today can be counted among the ranks of coastwise, brown water and inland trades plying domestic waters. The process of increasing the frequency of medical renewals from five to two years will not be as simple as it looks. The National Maritime Center is arguably only now coming up to speed on their (new) medical certification process. What will happen when the number of approvals more than doubles in a very short period of time? Are the authorities ready? Only time will tell.

(As published in the February 2014 edition of Marine News - www.marinelink.com) 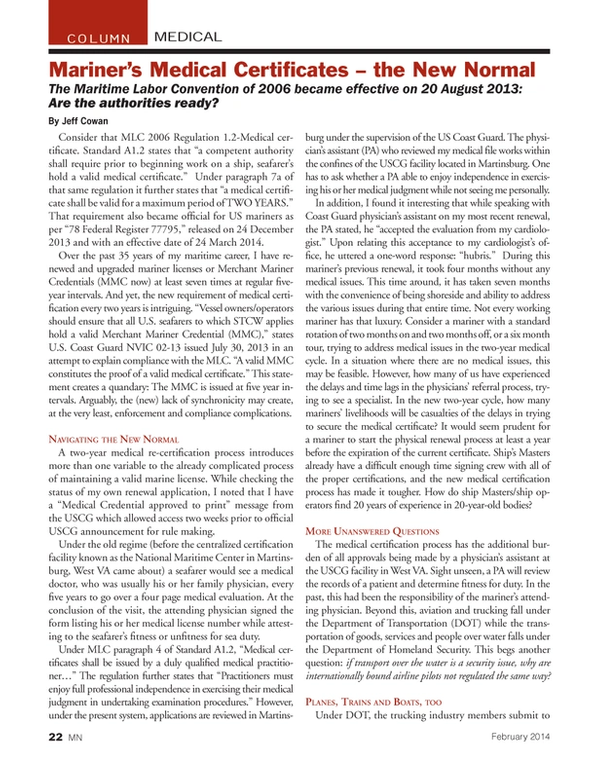